Last weekend I visited the yearly Tourism Fair in Lisbon (BTL). TAP's stand was the most prominent of the exhibition. There we could see the new Business Class seats that are installed in the two A330-200 that will be soon introduced in the fleet.

At the same time we were invited to try the new seats, a leaflet was given to the visitors telling us the retrofit plans of the current fleet (for both medium and long haul aircraft) and the features and configurations of the new aircraft, including the A330neo that shall arrive in 2017. 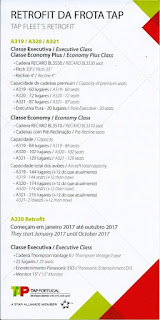 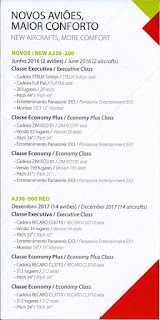 Also at TAP's stand we could find a nice model of the A340 in a generous scale. 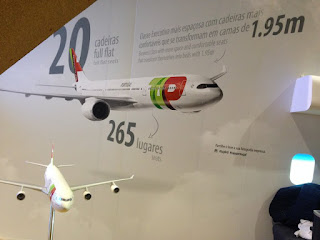 In the same pavilion, there was also the stand of Azores Airlines - the new brand of SATA Internacional - featuring a large whale tail.

Later that night, it was time to meet the real CS-TOA for another transatlantic flight! Here's a look of the cabin before boarding.

Email ThisBlogThis!Share to TwitterShare to FacebookShare to Pinterest
Etiquetas: LIS