For many years I was trying to find a way of flying on the L-1011 one more time. The last time that happened was in 1993, a return flight  from Rio de Janeiro to Lisboa with TAP Air Portugal.
In the early 2000s, the L-1011 was already a rare type around the world but in Portugal there were still 4 examples flying for charter airlines. However these aircraft were mainly deployed on ACMI contracts rather than on scheduled or even (programmed) charter flights with tour operators.
Somewhere in 2005, I even got a new passport since Luzair was operating some scheduled flights for Air Luxor to São Tomé e Príncipe and maybe this represented a chance of flying a roundtrip flight for free since I knew many people from Air Luxor. That was my last hope which unfortunately did not become reality.

In the beginning of 2007 I was putting my studies in engineering into a halt and pursuing a career in aviation. I was seriously thinking of getting a Flight Dispatcher license and wait for the next course at Gestair Flying Academy. But in April that year Luzair was hiring Flight Attendants and I submitted my CV.

This announcement was not a surprise since the airline was trying to get back its other L-1011 which was stored in Amsterdam since 2004. Looking back, it's amazing and foolish how I considered it my plan B. But Luzair recruitment ended before the Flight Dispatcher course started and after some smart advice of a friend who worked for Luzair as a Flight Engineer, I decided to go for it!
"Welcome to Aviation", someone said when the first set of future cabin crew members was selected.

Since this recruitment was not a priority I remember being very calm and relaxed during the 3 or 4  interviews I had. I remember when someone asked what was an engineering student doing in a Flight Attendant recruitment, I simply replied "I'm looking for a job". I also knew Luzair very well and its type of operations since they began to fly in 2004. So nothing they told me about the airline was a surprise for me.

The next step was doing the mandatory medicals and, shortly after that, training would begin. After one week of training the idea of becoming a Flight Attendant started growing on me. And after all I would be flying the L-1011! Not as a passenger anymore, but as a professional.


The most exciting moment during training came when we visited the aircraft. It was the first time I entered in that particular aircraft (CS-TMP, msn 193H-1248) with the typical 5 rear toilets arrangement. 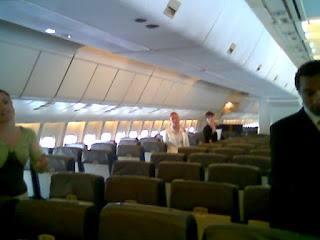 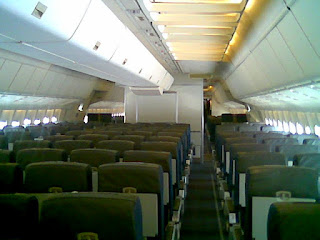 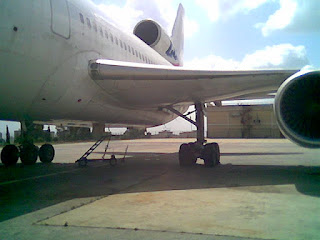 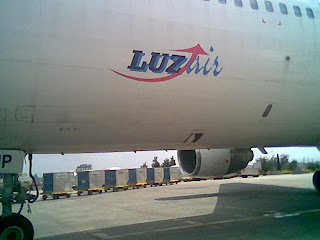 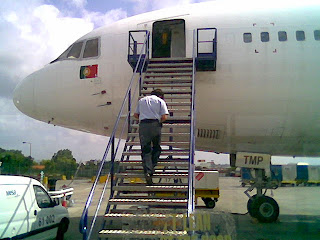 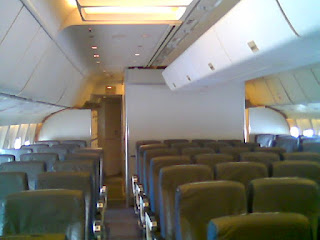 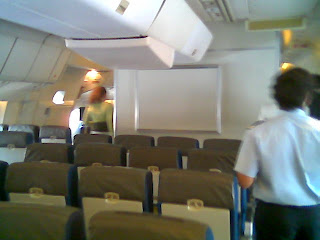 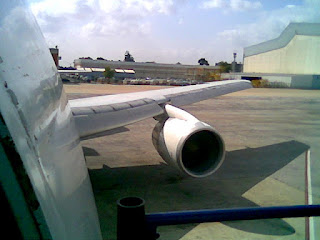 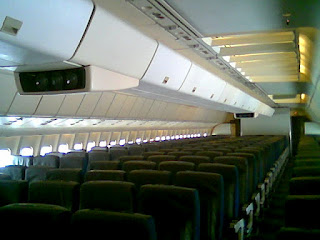 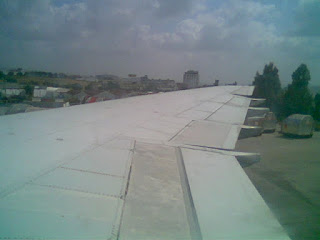 At some point, for all of us, it seemed that the training was taking too long as we had our minds already set on the first flight. But after the training ended on 19 June we would have to wait more than a month to sign our contracts and start flying because the arrival of the second aircraft was delayed.
A couple of days before we signed the contracts, we were provided with our uniforms. And for the first time in its airline form existence, Luzair had its own uniforms, leaving those from Air Luxor which were in use since 2004. For male crew members, the novelty was a pink tie, which (I must confess) was a success despite some initial reluctance about that idea.

August 2nd was the first big day. I signed my first job contract ever! And I was told I was in the first group of guys that would be examined in flight and the first flight would be the next day! After waiting for so long, everything seemed to be happening so fast now. And the 2nd L-1011 (CS-TMR - which unfortunately I never flew) arrived in Lisbon Airport on the 29th of July.
After waiting for a call of the Crewing Department, I was told that we would have to standby until a new date for the first flight. It was like giving a candy to a kid and taking it back... But I didn't have to wait for too long.

Honestly, I don't remember being nervous. I felt some anxiety but I was not nervous at all. During the briefing we would have some kind of oral examination regarding Emergency Procedures and Safety Equipment and that would determine if we could proceed in the flight or not. We would be a total of 4 new crew members being evaluated beside the normal (and minimum) cabin crew of 7 elements plus our examiner.

I arrived early at the airport and remember seeing our flight LUZ703 to Natal displayed on the departures' flightboard. Despite the flight number showing LUZ, we would be flying for BRA from Brazil which was having serious technical problems with their 767 fleet. For me it was great to return to Brazil in my first day of work. But.... we wouldn't know until we arrived there, if we would be staying or returning right after with the aircraft. Well, I was prepared for every scenario, even staying there for a week! In fact, with Luzair's type of operation we would have to be prepared for everything.

Soon, all the crew members started to arrive and gather near channel C. We presented ourselves to the others: Flight Crew and our Cabin Crew colleagues. At 12:25 pm we would be passing through channel C and security control and then take a bus until the aircraft where the briefing would take place since the airline didn't have its own space at the airport.

During the briefing and after we answered successfully the questions about emergency procedures and safety equipment, some details about the flight and the service were given. I still keep those notes with me:

Flight time would be 6:37 with 231 passengers. I was assigned to work in the B zone (mid galley). I must say it would remain my favorite galley on the L-1011 until the moment I left Luzair. It only had two ovens, so not much work to do ha ha ha!

Before passengers boarded the aircraft, I accompanied and helped the B2 (crew position on the aircraft) doing its safety, pre-flight and security checks under supervision. And then everything was ready for the great moment. My first day of paid work, my return to Brazil and I was about to fly the L-1011 again!

And how amazing it was hearing the three Rolls Royce engines coming to life during the start-up and feeling that low frequency smoothly vibration shaking the aircraft. I would take-off in one of the two jumpseats behind the cockpit. I remember our Purser telling us during the taxi that we would enjoy our new life. We lined up runway 21 as those powerful Rolls Royce engines spooled up for take-off: a dream come true... And it wouldn't be my last TriStar flight but the first of many more to come. Indeed, it was the beginning of a new life.

Passengers would be served a lunch after take-off and a snack before arrival at Natal. We, the trainees,  actively participated in the cabin service. As it was a day flight, passengers didn't sleep that much and were very demanding. I think during the whole flight I was seated only for 5 minutes. And another glass of water, another glass of juice, etc, etc. But I enjoyed every minute. During the cruise, one passenger talked to us saying that we had a beautiful job and that she also wanted to become a Flight Attendant when she was younger.

Everything went just fine during the flight. When passengers disembarked at Natal some girls were also saying good bye to me and they knew my name! I guess they were instructed to say it by some of my older colleagues.... hum, don't now! Then, it was time for the debriefing and it was without surprise that all of us (trainees) passed the examination flight. I was very happy, I must say. We were also told that we would be taking a BRA domestic flight and spend a night at Fortaleza - we were not immediately returning to Lisbon with the L-1011 after all.

For the short hop NAT-FOR, we were flying a 737-300 with tail number PR-BRG (now flying for Webjet). I think the last time I flew on a 737 was in 1994. This Boeing 737 didn't even have a reinforced cockpit door but a carved wood one! Fortified cockpit doors were not mandatory in Brazil for domestic flights (at least at that time). During this flight the captain knew that we were on board and while addressing passengers he also gave a special welcome to the Luzair crew members!

Finally we arrived at night in Fortaleza. In our hotel we met some crew members of BRA which would be part of the crew next day for the return flight to Lisbon. They invited us to join them and drink some beers! Later, I was surprised to know that Paula was the author of the blog Comissária de Bordo of which I was already a follower! Such a small world...

As we would be departing only at night, next morning we enjoyed some beach time at Praia do Futuro.

The return to Lisbon was on a 767-200. A first for me! What a great way of starting my career. I was enjoying my passion for aviation and adding new types to my "logbook". The tail number of this aircraft was PR-BRV, initially delivered to TWA. As we boarded the aircraft, we found that its configuration was a full economy. It was a free seating flight but Paula kindly advised me to choose the seats in the last rows since they were blocking them and we could have more space (the aircraft was not full, of course!). Such a nice BRA crew and Paula - who really loves her job - is undoubtedly a very good professional.

PR-BRV was a really old 767 (line number 39) and in fact its manufacture date was some months earlier than our L-1011 CS-TMP! It was funny to see that it shared the same type of cabin problems we had with reading lights not working, no audio on some seats, etc. 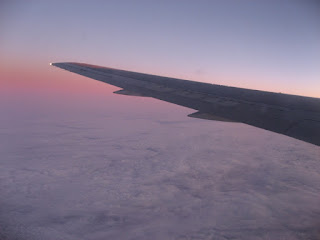 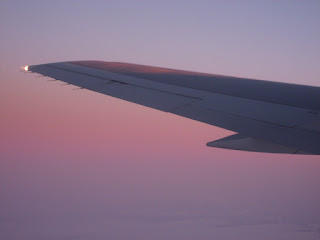 Seven hours and twelve minutes after take-off we were landing at Lisbon Airport:


It was a nice and comfortable flight and with a great crew! Unfortunately BRA broke up some months later and every people working for them found themselves suddenly unemployed. However, I was happy to know that Paula is now flying for a more renowned and established airline.

All in all, my first flight as a crew member was a wonderful experience. No need to say that after having my rest at home I was already waiting for a new call from the Crewing Department!

5 years later I still have my wings although not flying the L-1011 anymore. And I'm in the process of having new ones: pilot's wings!
Publicada por LisbonJet em 10:37 PM

Email ThisBlogThis!Share to TwitterShare to FacebookShare to Pinterest
Etiquetas: FOR, LIS, NAT